From UmbraXenu
(Redirected from CSHO)
Jump to: navigation, search

Formerly the Hockley Highlands Inn and Conference Centre, on the East side of 3rd Line Road, Mono, Ontario, south of Dufferin County Road 7 (Hockley Road), opposite the Hockley Valley Resort, is a hotel and conference centre with 5 main buildings on 200 acres (0.81 km2) of forested land sloping towards the Hockley Valley. It has been closed to the public since May 2007.[1]

Originally built in the 1960s by Ontario Hydro for internal corporate use as the Glen Cross Conference and Training Centre. It was sold to Goldman Hotels Inc. in the late 1990s and opened as public hotel, catering mainly to large conferences and local functions such as weddings.[2] In May 2007, it was abruptly closed.[3][4] From 2003 to 2007, the inn donated space to Theatre Orangeville, which used 5,000 square feet (460 m2) of space for set design, prop storage and rehearsal space.[5][6]

In 2009 the property was purchased by the Church of Scientology which plans to establish a national headquarters and retreat site there.[7][8][9][10] 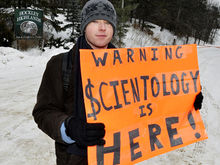 Entrance to Peter Beecham Side Trail

The main Bruce Trail hiking trail runs through the property, as well as the Peter Beecham Side Trail. A Scientology representative, Angela Ilasi said that they have no plans to alter the existing Bruce Trail.[13]

Unless the AOSH Canada generates any new income, any income that it makes will be subtracted from the income at Flag and AOLA, with the added expense of the Sea Org staff to operate the Advanced Org and hotel.[dox]

After the Toronto Org, the Continental Liaison Office Canada was moved to the former Charleston Residential School at 19646 Kennedy Road Caledon. Since then, this property has been listed for sale at least twice, but it's unconfirmed where the CLO has moved to. An apparently non Scientology-connected drug rehab Addiction Canada moved in sometime in 2013. Initially their site used the real estate photos with pictures of Hubbard, etc, but later changed them.[14] A visit in fall 2014 confirmed that there was an Addiction Canada sign in front of the building. It's possible that some of the Sea Org staff were re-allocated to the Ideal Cambridge Org.[dox]

In 2017, Scientology rented a location in Guelph to serve as the "Canadian HQ", presumably the CLO.[15]

Someone explored the inside of one of the buildings. (That might be illegal trespassing and is not recommended.)[16]