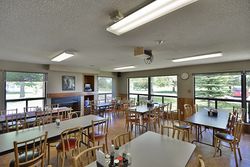 Formerly located at the Toronto Org with a staff of 70 Sea Org members, with the planned goal of moving to the AOSH Canada, if it opens.

After the Toronto Org, the Continental Liaison Office Canada was moved to the former Charleston Residential School at 19646 Kennedy Road Caledon. Since then, this property has been listed for sale at least twice, but it's unconfirmed where the CLO has moved to. A non Scientology-connected drug rehab Addiction Canada moved in sometime in 2013. Initially their site used the real estate photos with pictures of Hubbard, etc, but later changed them.[1] A visit in fall 2014 confirmed that there was an Addiction Canada sign in front of the building. It's possible that some of the Sea Org staff were re-allocated to the Ideal Cambridge Org, which opened in 2013.[dox]

In 2017, Scientology rented a location in Guelph to serve as the "Canadian HQ", presumably the CLO.[2]

This category has the following 4 subcategories, out of 4 total.

The following 18 pages are in this category, out of 18 total.