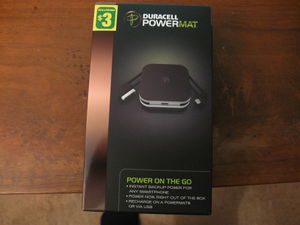 Since this is a work in progress, where I don't know exactly where I'm going, and with several directions to explore, this is going to ramble. Once I've got somewhere, I'll probably branch off a conclusions article for the people in a hurry.

This isn't so much a hack article yet, as exploring something cool for a good price that can be used in lots of future hack projects.

While camping summer of 2014, I discovered that my cell phone will quickly suck its battery dry in marginal coverage areas. So, when the local discount warehouse had Duracell Powermat battery packs for $5, I picked one up. It works great for keeping my phone charged, especially when I'm using it as a wifi hotspot for my tablet or netbook.

I have no idea why this unit is suddenly being dumped on the market at low prices. Huge overproduction, replaced by a new model, some hidden defect, or perhaps the latest iPhones are finicky about what chargers they accept? Dunno. (If anyone has any hard info, email me. It's on the About page.)

When the local Dollar Store had bunches of them for $3, it was the time and price to hack them for other uses! I should have bought a bunch because, as great stocking-stuffers, they were gone when I went back next week. Hopefully there'll be more later.

The tiny manual says "Do not disassemble the charging device. There are no user-serviceable parts inside." Bwahahahaha! (Read Vernor Vinge's Rainbows End for what I think of that!)

It's not automatic, you have to press a button!

Sleepy at the switchover

More later, with pictures, as I disassemble my sacrificial unit.